Family Fun at Valley of the Giants Tree Top Walk 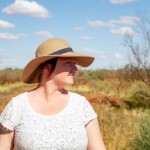 Nestled down in south west Western Australia, is an iconic forest region called The Valley of the Giants. The forest is a wonderland of native trees and wildlife. Some of the giant tingle trees are thought to be over 400 years old and reach around 70m high making these the third largest trees in the world.

The region extends from Walpole in the west to beyond Kentdale in the east, and from the coast inland to North Walpole, encompassing part of the Walpole-Nornalup National Park. You can explore the waterways of Circular Pool, hike along the Bibbulmun Track, go wine tasting at one of the many world-class wineries, but the real star of the show is the Tree Top Walk.

The Tree Top Walk is an elevated pathway that climbs and weaves through the forest canopy giving you a bird’s eye view over the wilderness below. The structure itself is quite beautiful with a slender and unobtrusive design. It is a one-way loop and the gentle gradient with fully enclosed fencing makes it the perfect woodland wonderland for a toddler to explore.

Adventure for all ages

We arrived around mid morning after driving the scenic route through the Valley of the Giants. We expected it to be busy, being a world-famous attraction, but were pleasantly surprised to find it quite peaceful. The infrastructure is well thought out with ample parking, large restrooms and even an education centre. Making our way to the entrance we showed the attendant the tickets we had purchased the previous day at Walpole Visitor Centre and opened the gate to our tree top adventure.

My initial trepidation about taking a high-energy, wiggly toddler up 40m in the air dissolved when I saw just how child-friendly the tree top walk is. Almost immediately you pass into the safe confines of the railings and start your climb into the canopy.

Maddie was happy to be running free in the bush again, and clearly excited and bemused by the giant metal climbing frame we were all playing on. We edged on, stopping frequently to point out a bird or admire the scenery. A small queue was forming behind us so we ushered Maddie up to the first platform and let them pass. Before long we established ourselves among a group of walkers who shared our slow pace.

A platform stands atop each pillar and the bridge reaches between them. The platforms make a perfect overtaking place or spot to stop and take it all in. Jed and Maddie quickly discovered that the bridges sway as people move across them and made a game of making them wobble.

The highest part of the tree top walk is 40m above the ground, but the tingle trees still tower above you another few dozen metres. You can feel quite small and insignificant standing there.

The majestic tingle tree is not only remarkable for its height and age, but also for its long and continuous history in the region. It is thought that this forest has existed for around 65 million years. That’s back to when the dinosaurs walked the earth. Back at the end of the Cretaceous period Australia was far from how we know it today. Although Western Australia was largely formed, much of the eastern states had yet to be created, and what was central-eastern Australia was covered in a shallow sea. The landmass we now call Australia was still attached to a supercontinent known as Gondwana along with Antarctica, India and Africa. Temperatures in the Cretaceous were higher than today so although the region we now call the Valley of the Giants was roughly 20 degrees further south; it probably had a similar temperate climate and high rainfall.

The Valley of the Giants may have existed 65 million years ago in pretty much the same form it exists  today. That’s pretty cool if you ask me. In the epoch of time between the end of the cretaceous, that big meteorite that wiped out the dinosaurs, the break up of Gondwana and India travelling north to collide with Eurasia and form the mighty Himalaya, this area was a pocket of relative geological tranquillity.

I thought about this while I stood in the canopy, pondering the significance of this region. There are few living places that have remained unchanged for such a long time, and that allow us a glimpse into the past. Much like the fossil footprints we discovered in Kalbarri, or the thrombolites of Lake Clifton, this is a ticket to time travel.

All of this was, of course, lost on Maddie who was joyfully jumping up and down trying to get the bridge to wobble. Our girl has no fear of heights whatsoever! Just like her father. We spent maybe half an hour altogether on the Tree Top Walk, which was plenty of time to enjoy the views, though you really could spend much longer if you wanted to spot the native birds, or maybe a possum. Knowing we were getting close to Maddie’s nap time we moved forward to enjoy the second part of the attraction, the Ancient Empires Walk.

As you come back down to ground level you join a path through the base of the forest and are offered either a gate to start the Tree Top Walk again, or to continue on to the Ancient Empires Walk. This is a paved trail that meanders through the base of the forest, in some cases straight through the hollow base of the trees. Informative signs teach you about the different flora and fauna and point out the different types of tingle tree, the red (the biggest one), yellow and Rate’s . The yellow tingle has the highest distribution but is actually taxonomically unrelated. The red and Rate’s tingles are closely related. Karri, marri and jarrah trees are also common in these woodlands.

We passed dense grasses, over a foot tall, that had occasional small openings at the base. A sign told us that quokkas live in the area and form little tunnels through the thick grass through which they can run protected from predators above. We did stop to see if we could see one of these little marsupials but without any luck. The Walpole Wilderness is the home to the largest population of quokkas on the mainland. Sadly, many have fallen victim to stray and feral cats and foxes. For a close up encounter with a quokka, visit Rottnest Island just off Perth.

The red tingle has a tall, straight trunk with huge buttress base, some over 20m in circumference. Historic bush fires have hollowed out the base leaving large caverns big enough to walk through. Decking has been thoughtfully and respectfully constructed around these trees to allow you easy access through – a convenience Maddie made full use of as she ran loops around the giant buttresses. Signs reminded us to stay on the path but with increasing speed, and her balance impeded by tiredness, Maddie took a corner too fast and fell straight off the decking, landing in bush. This signalled our time to move on.

We made our way back to the car, bypassing the gift shop. Usually I love to peruse the gift shop but it was jam packed, making it the only busy place in the park. Maddie protested leaving, trying to run back into the Ancient Empires walk, but was asleep three minutes into the drive.

The Valley of the Giants Tree Top Walk is a wonderful experience, and one you cannot miss if you are in the region. We found it to be a fun, educational, calming and safe place to take a young family. And I think Maddie really enjoyed her time running through the forest.

We would have liked more time there but, as any parent of a one and a half year old will understand, we sometimes have to work around their sleep schedule. It is a place you could spend as much or as little time in as you desire. We would have loved to join one of the free guided tours but tend to go at our own pace these days, allowing Maddie to stop and play when she wants, and indulging her curiosity.